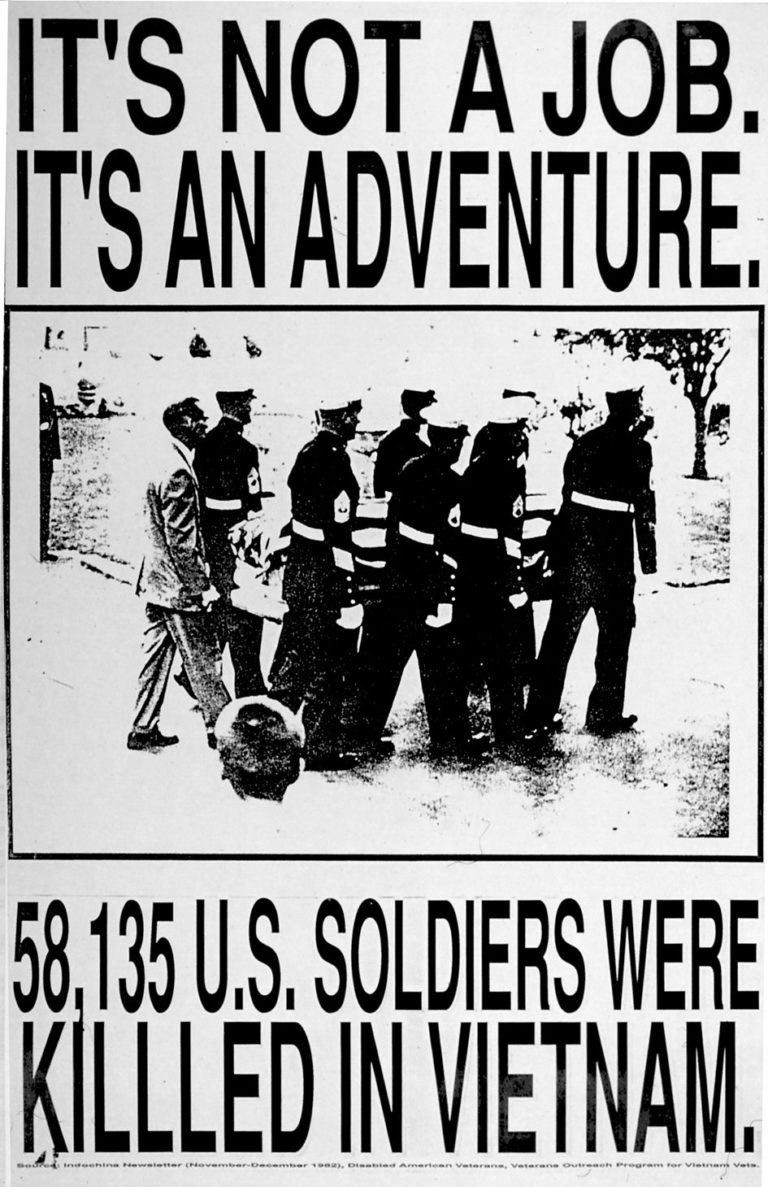 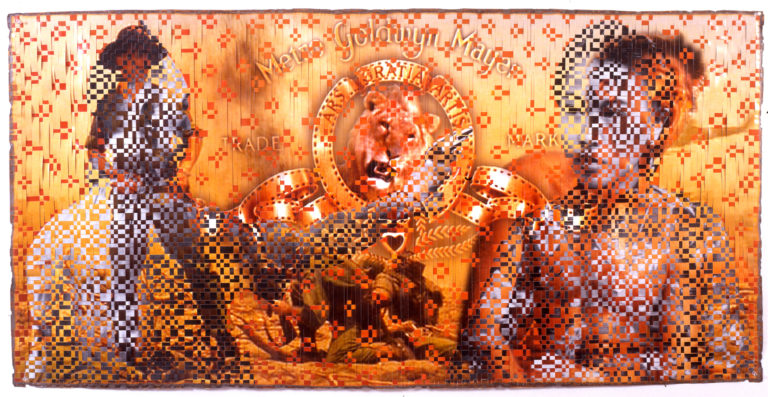 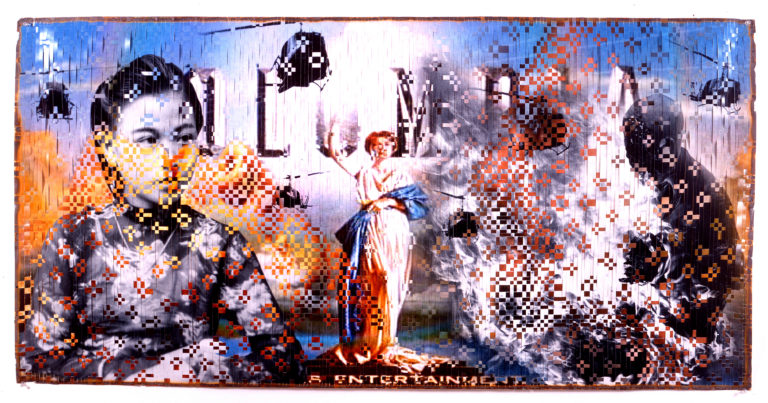 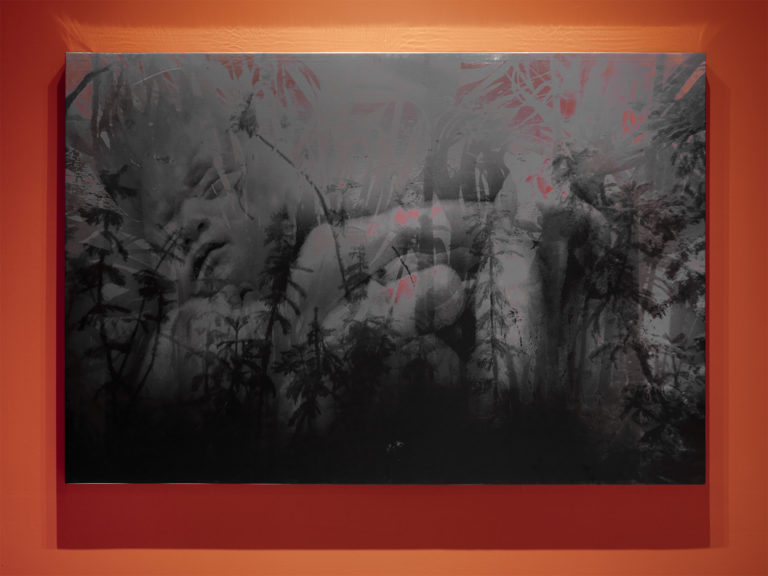 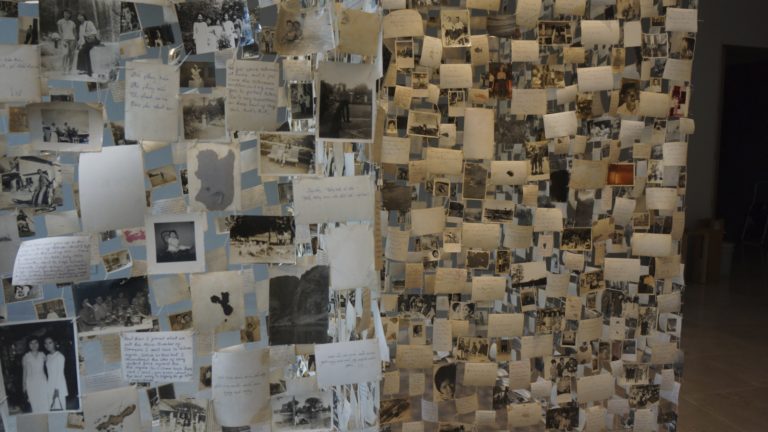 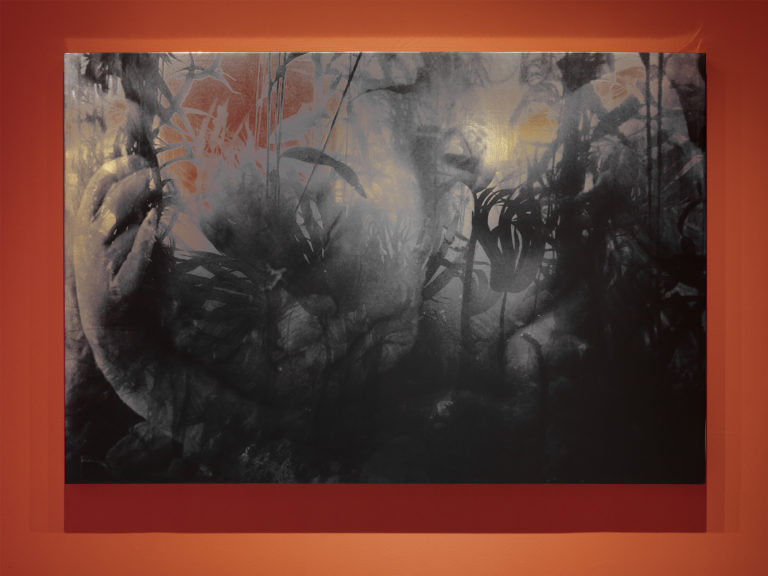 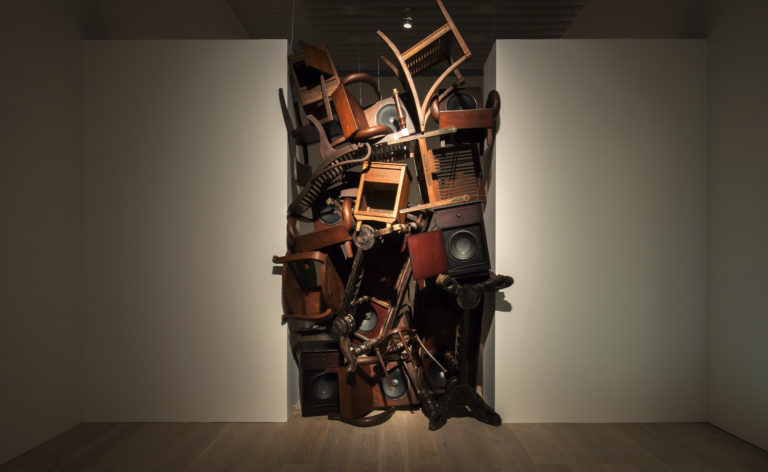 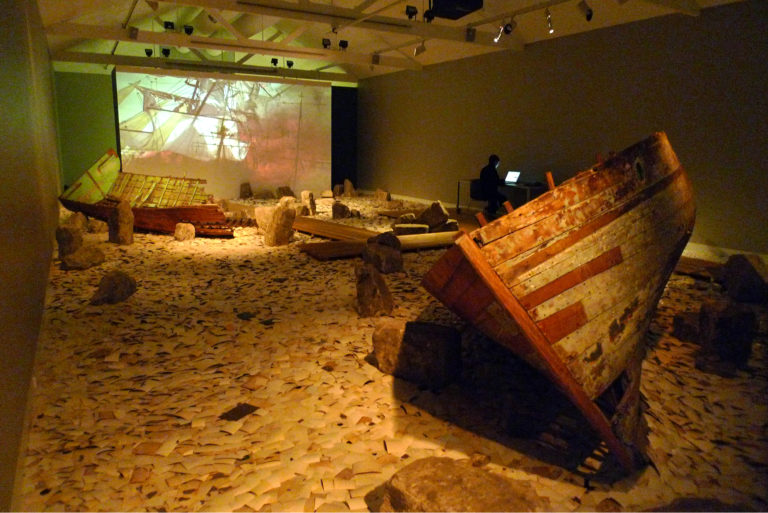 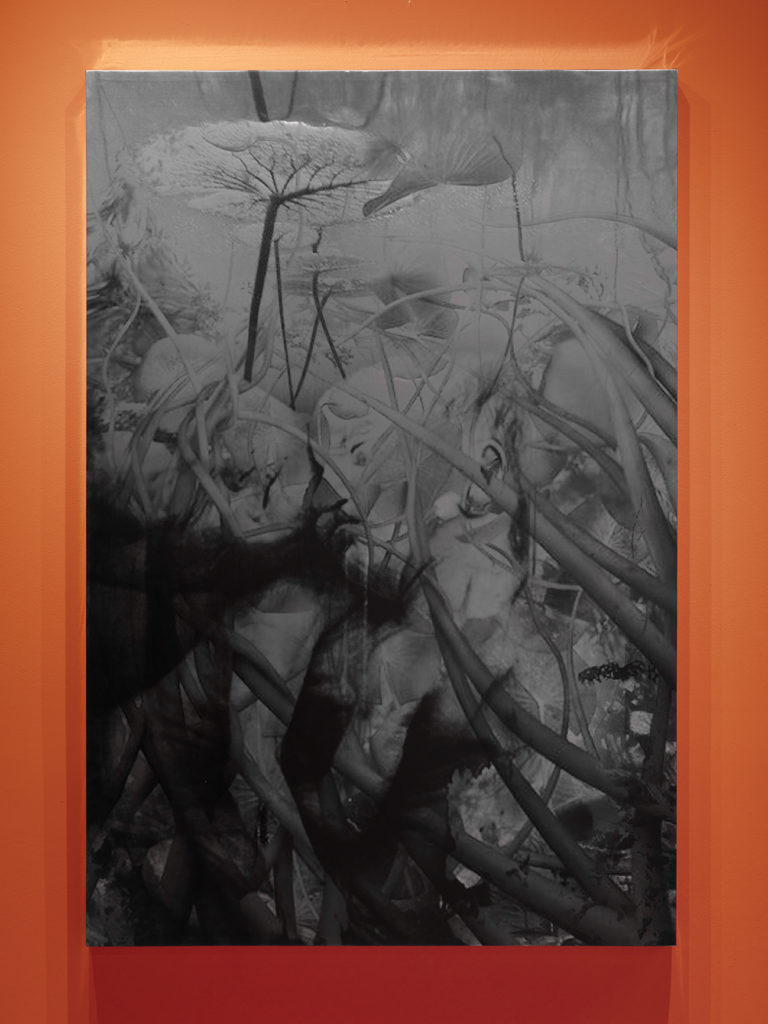 Born in 1968, Ha Tien, Vietnam. In 1978 when he was age of 10, his family move away from Vietnam due the political pressure from Communist Party of Vietnam. Spent years in California in US till he moved back to Vietnam in 1997 and now works in Ho Chi Minh City. He has been working with various type of works, especially using photographs as medium. In 2007, co-founded the non-profit art space Sàn Art in Ho Chi Minh devoted to organizing contemporary exhibitions and workshops.

Before writing about the works of Dinh Q. Lê, it may be necessary to briefly review the history of Vietnam after World War II. While Vietnam in our image is the busy city of Hanoi today, or owe largely on Hollywood movies on Vietnam War, and the gap between our superficial image and the reality about Vietnam is an important theme for Dinh Q Lê.

Japanese army invaded Vietnam in the World War II after the French colonial era.  Immediately after the end of the war, the Communist Party declared its independence, but the following year French army came back to Vietnam. The French established a puppet regime in the south, and Indochina war broke out between the Communist Party in the North.  In 1954 when the defeat of France became decisive, a peace treaty was signed in Geneva, and Vietnam was divided into north and south at 17 degrees north latitude.  The Vietnam War broke out in 1959 aiming to regain the South, which was supported by the US after France. The U.S. began to send forces to intervene the war 1961. The Vietnam War ends with the fall of Saigon in 1975 and the unification of the whole country by the North.  The relationship with Cambodia deteriorated, and in 1977 Khmer Rouge under the Pol Pot regime invaded Vietnam by crossing the border line and massacre Vietnamese villages.  Phnom Penh falls by Vietnam offensive. From the late 1970s to the 1980s, 1.4 million people, so called Indochina refugees, emigrated abroad from Vietnam, Cambodia and Laos.

Ha Tien, where Lê was born is located at the border with Cambodia, and in 1978 when he left Cambodia with his parents at age of 10 was the year when Khmer Rouge was attacking the boarders in Vietnam. Looking at the works again understanding the historical background of the fierce history of the time, we feel it was natural for Lê to locate war an important subject as an artist.  On the other hand, what made the Lê to rediscover this war from his new point of view was seeing how Vietnam War was treated in the US.

By the end the ‘60s, situation occurring in Vietnam started to be conveyed to US public through photo coverage and news. As we broadly know, the reaction developed into a major public anti-war movement in conjunction with other social rights movement. On the other hand, we also need to remind that these campaign for peace largely owe to the stress of Americans experiencing a long war fighting for others, and that the Vietnam War itself has become a part of huge industry through many American movies such as "Apocalypse Now" and "Platoon" which are seeing the War only from Americans.

Interested in art and photography at the university in the US, Lê started to use photography as a material. It was at that time when Lê realized that the real Vietnamese people is not talked about when Americans talk about the tragic situation during Vietnam War. His earlier work "Vietnam War Poster" contrasts the facts in Vietnam War against what is broadly known in U.S. (for example, 58,135 deaths of the U.S. military with 2 million deaths of Vietnamese people). The artist made various patterns and pasted in his university. Although this is a work with a political message, he is not expressing himself as a whistleblower from the Vietnamese side as he mentions "I do not think that I am 100% Vietnamese", and thinking that he was "too Americanized". We are to see later clearly that his main focus was not about the political messages. Instead, he himself must have been understanding that the image of war in the U.S. is already composed patchwork, like a collage, leaving only the information necessary for the U.S.

Lê started “Photo weaving” already when he was in university. It is a method to weave strips of cutout prints. Many of the photographs used were taken from Hollywood war movies, and the Hollywood movie was of course the Vietnam seen from the American side, while Vietnamese were treated as "props" and frequently appear only as invisible threat hidden in the jungle. In these works, the artist collected the images of the “missed” Vietnamese from the film and knitted together with other scenes. Through the work, we are to understand that our understandings are always biased, and the true outlook may be in a deep haze without being able to take a single clear image, just as collage. Therefore, the theme applied by “photo weaving” can be effective on various subjects. Lê created a new series of “photo weaving” in 2012, the year after the end of the Iraq war, combining the motifs of Iraq's ancient Sumerian civilization with the present.

The artist recalls that the source idea for weaving photos can be trace back to the memory of his childhood, working to help her aunt weaving grass mats. Still in Vietnam today, there are ladies household rugs using discarded fabric. For the work in Setouchi Triennale 2019, he also exhibited a work entitled "A Bouquet for the Lady of the House" using woven mats. Conditions of the site and memories, such as the furnishings left in an empty house with the people leaving, or memory of ladies in Vietnam and recent return of his own aged mother to Vietnam, were reflected and interlaced together in the works of Setouchi. For the mats of Setouchi, the artist worked together with ladies in Vietnam to prepare discarded fabric to have them woven in the island by the volunteers. Lê’s work is often like a large collage, putting small pieces together, or combining various stories in multiple layers to produce a single work.

After traveling back and forth several times, the artist moved his working basis to Vietnam in 1997. It has already been 20 years since he left the country as a boy, and we can imagine that his identity may already been a complex mixture between the US and Vietnam. Perhaps this situation may have helped him objectively focusing the history. The work made of many old photographs and postcards has been exhibited several times while changing the shape according to the space.  Each photographs and postcards belonging to the memory of the individual looks fragile and ephemeral, but by connecting them, they become a large lump, and the whole work makes us feel the huge weight and mass of the "past". At the same time, it still is a light fragile object float in the air, which may easy collapse by cutting one connection between.

In 2011 at Australia, the treatment of boat people and acceptance of refugee was a national issue at that time. Old photographs were also used to cover the entire floor in the installation entitled “Erasure” at Sherman Contemporary Foundation (also exhibited in several different countries later) that year. I couldn’t clearly know the source of the idea of ​​a burning ship, but it may be burning to erase the evidence that someone came in by the boat, or the history of the immigration, the historical fact that many Australians were once immigrants from the West.  What lies underneath on the floor may be the forgotten non-Western people without names. There may not be one correct way to read the work, but I think the works open to viewer’s imagination, various ways of readings, are one of the important conditions to be an excellent artwork.

How can we create works that appeal to the viewer by using and reconstructing archives of the past such as photographs and images in the current era of universal digital media? The works featured here are only few patterns of the style by Dinh Q. Lê. While there are number of artists are now working using archives, what makes Dinh Q. Lê's works impressive is not only his objectivity finding a theme, not to mention, of course, the experience of the artist himself. But, I think that the artist is eagerly aware of the social nature of having to properly give an impact to the viewer as a means to convey meanings, a reason for him to create an object which is called as an artwork. That makes this artist's works very impressive. Toshio Kondo