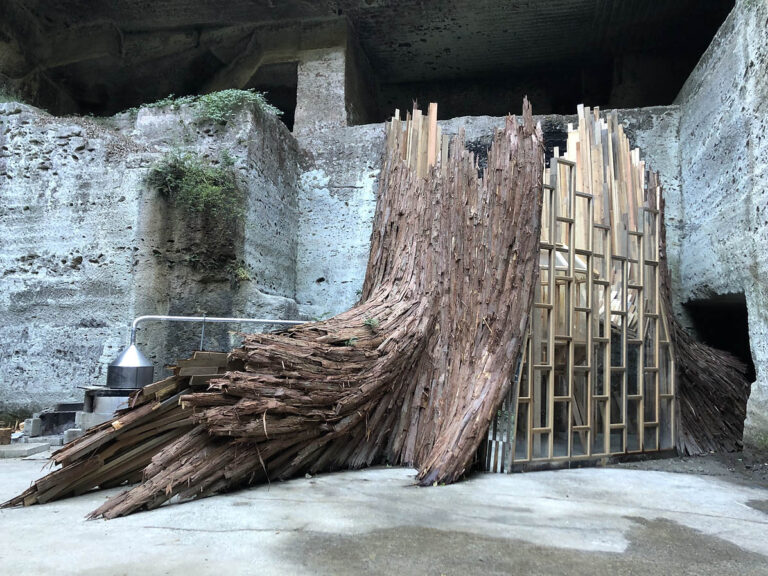 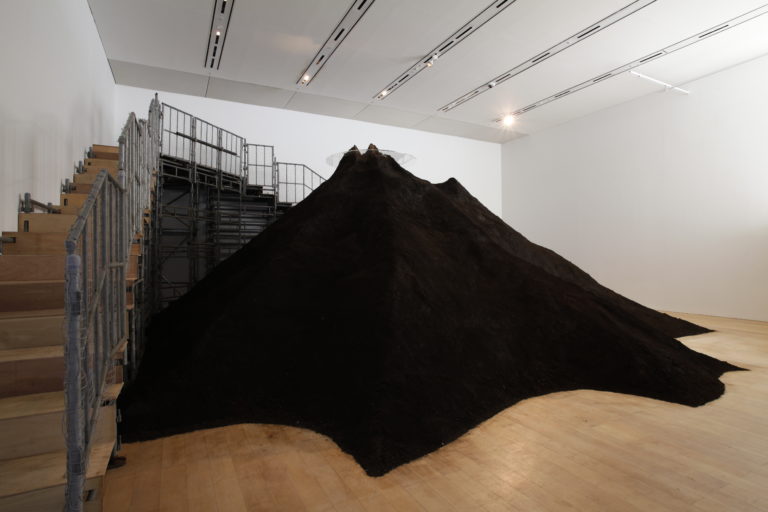 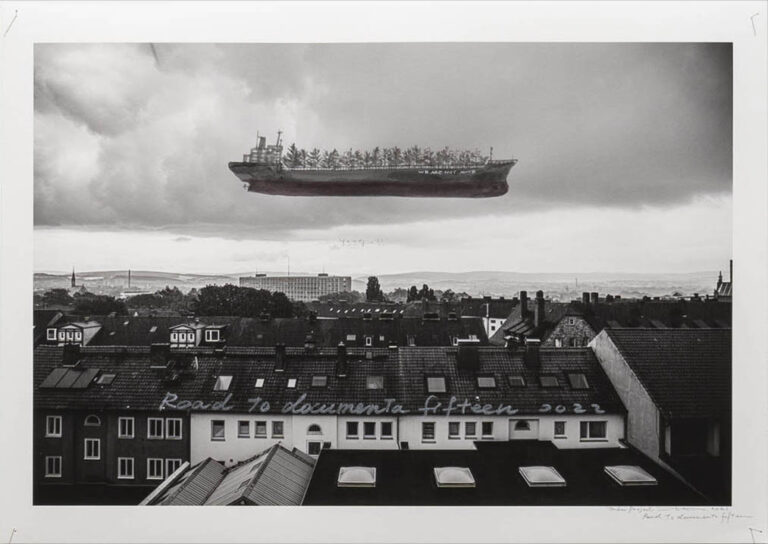 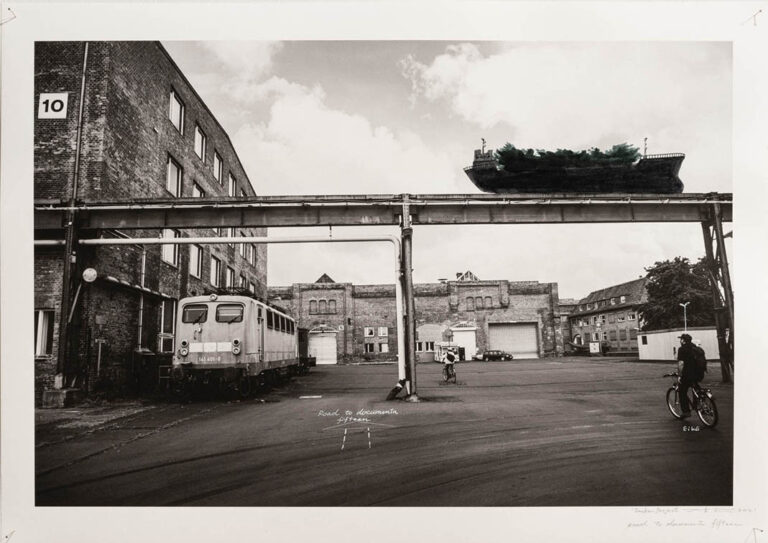 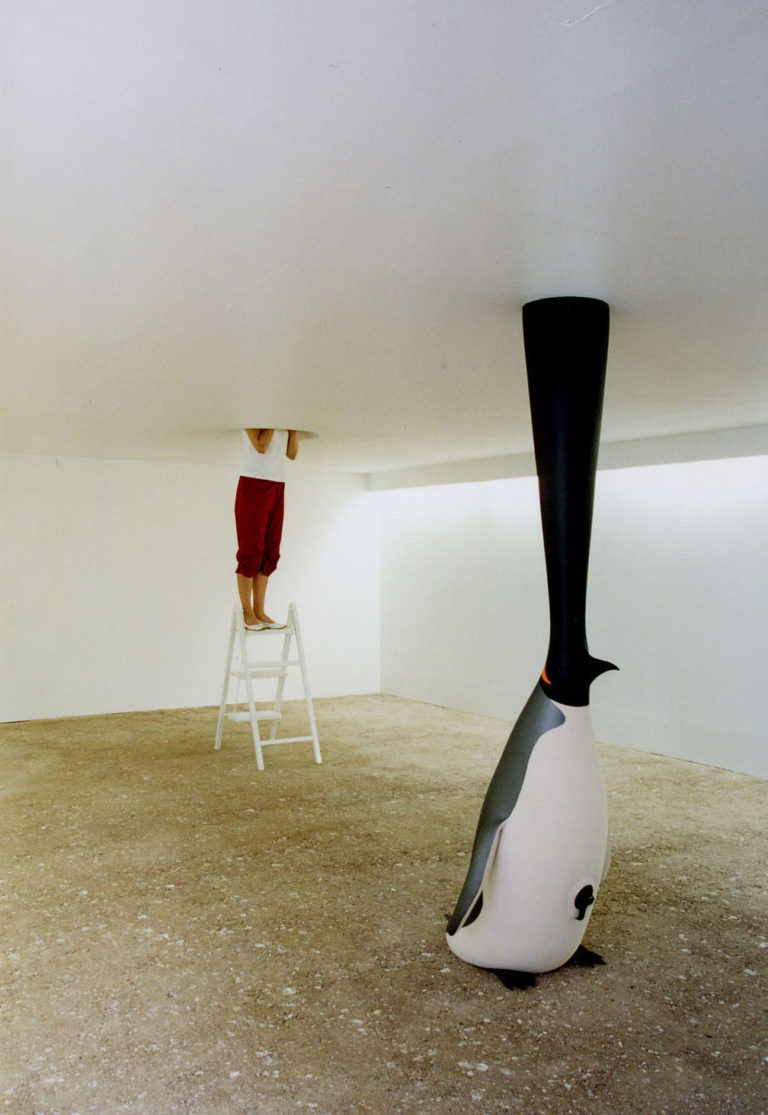 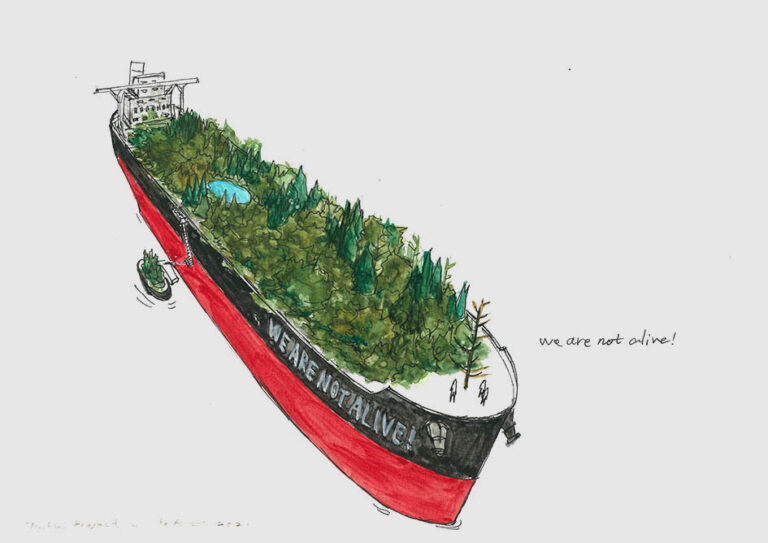 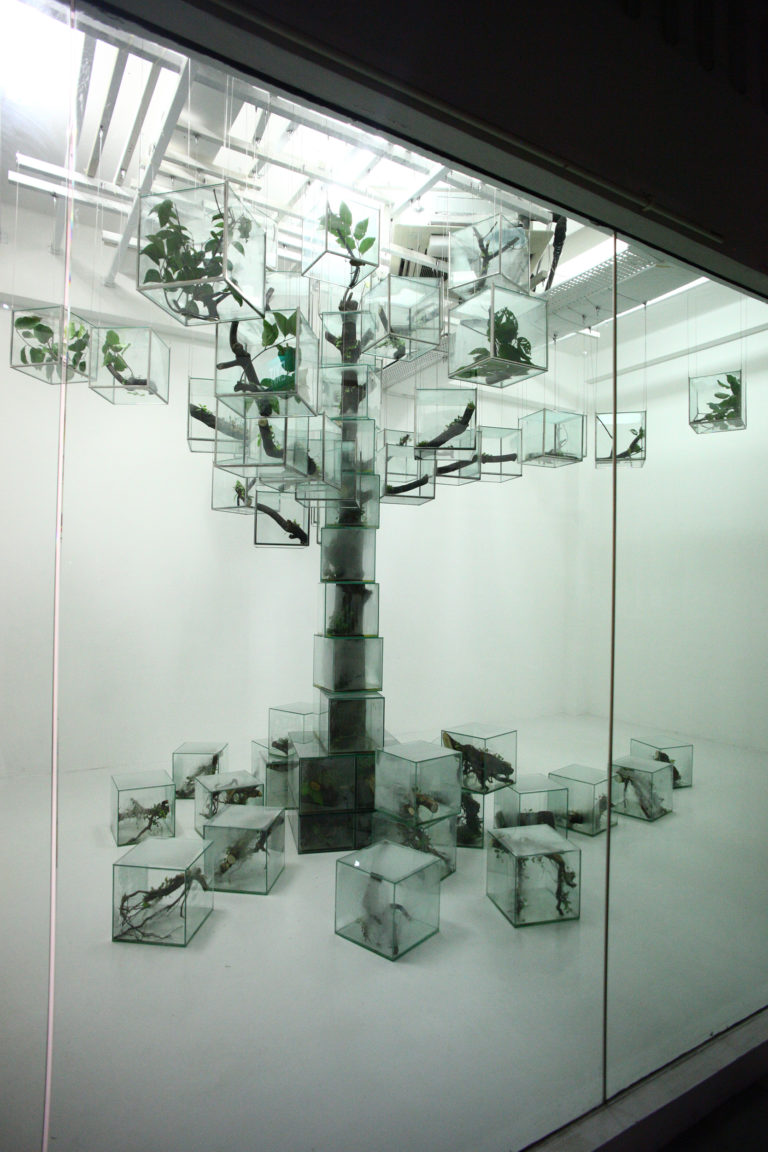 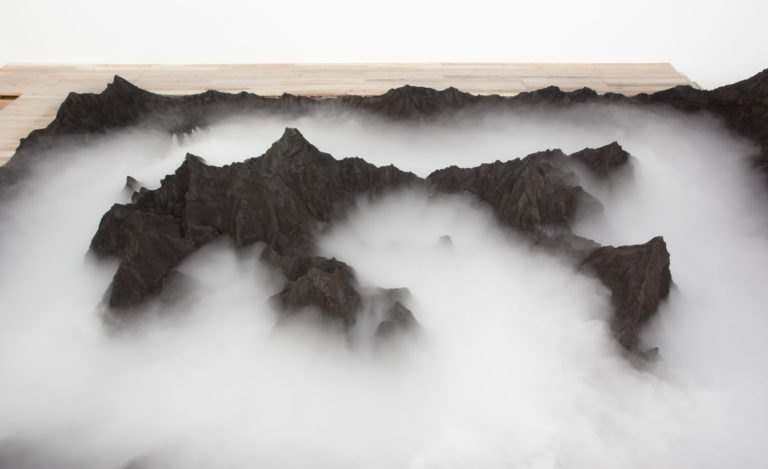 Born in 1968, and grew up in Nagasaki, Japan. Awarded Meisterschuler at the Kunstakademie in Dusseldorf in 2002. While staying in Germany after its reunion, his working theme for projects has been “boundaries”. He has been working with wide range of material including drawing, installation, and video, and participated number of international and domestic exhibitions.

There are many projects that I would like to realize, but I decided to start with the "Tanker Project" together with Art Tank. It is still a virtual ship on the web, but I would like to make it a place where various artists can board and do different activities of their own. For me, the Tanker Project is my culmination as an artist, a dream, located in the deepest area inside myself. I think we are able to do on a real ship in the future. It is a project that embodies our earth, where people all over the world can experience, delighted with, enjoy and grow it together.
The earth on which we live is like a big ship. This ship does not have conflicts, destruction, and destruction that we are causing, and it exists in a harmony with nature. Tankers are a symbol of energy and power. Energy is not just the visible ones, they are emitted, absorbed, and emitted again from every beings. Originally, art is like an energy, and it gives power to many beings, not just humans, even to the earth. And one of the possibilities to create that kind of energy should be us who live as artists.
This project exists as a symbol of such energy-producing artists, all people, living things and nature, all in harmony. Through the project, we can re-recognize the original condition how it should be, potential of the earth. And as tankers travel around the world, joy and happiness are cycled and shared by many people.
Sept. 1, 2020 Takashi Kuribayashi

Kuribayashi creates works based on his long-term working theme “boundary” along with his interest in nature and relationship between humans and the environment. His works makes audience physically experience the work rather than mere visual experience. The range of works he creates is diverse, quite unique among Japanese artists. Kuribayashi's activities always show the attitude of crossing the boundary from one area to different wider area. It is an attitude to cross the boundaries to unnamed open space by deepening the considerations and the idea, rather than re-selecting one category from another.

Kuribayashi came to Tokyo from his native island to enter art school. Graduating the university, he traveled US and Europe to find a suitable school for himself to move on. Enrolling Düsseldorf Kunst Academy, and living for a while in Germany, it was time right after the country has been reunited. Influenced by the atmosphere of the period, "boundary" gradually became an important theme for him. Boundary in this case is not just merely a visible boundary that separates two sides. It is about the invisible definition, a gap between the two, including an intermediate zone between the two, or an act of going back and forth the boundaries, or to raise a questions about the social issues behind, or the meaning artificially defined by lines such as boundaries of a nation. Kuribayashi’s act is to leap on the fault line to mediate on the layered issues. His works are often large-scale works to welcoming audience to experience the boundaries.

We can see Kuribayashi’s interest in “boundary” already in his work from 1997, still existing in Universität Kassel which was made for the exhibition held simultaneously with Documenta 10. Inspired by 7000 oak trees planted by Joseph Beuys in 1982 for Documenta 7, Kuribayashi made a shape of a house, fixed with concrete, and planted 4 oak trees inside the house shape. The oaks would grow their roots destroying the fixed concrete house shape. Kuribayashi is interested in relation of human and nature, or natural environment issues. He has even visited Fukushima to investigate the impact of nuclear power plant after the 3.11 Tōhoku earthquake and tsunami. His work, “Tree”, in 2015 shown at Singapore Museum was an impressive work showing the relation of nature and human, and life and death of nature, using a tree cut down by the redevelopment project of the city. We were able to imagine by seeing the tree tapped in glass boxes how human is controlling life and death of the nature easily, and moreover, realizing that the nature in cities are what artificially made by human.

The first milestone for Kuribayashi's artistic career was the “Out of the Blue” exhibition held at Tokyo Wonder Site in 2003. Kuribayashi divided a space horizontally in two with temporary ceiling making audience move from lower layer to the upper, thereby actually making the spectators crossing the boundary. In the lower space, there only was a stepladder and a penguin with its neck stretching up to the ceiling. Above the stepladder, there was an opening for audience to stretch one’s head out to see the space across the ceiling, to find a space with water contained behind the ceiling. Maps of the world map we generally see separate land and ocean with different colors and defines the land as the terrain for human. Penguins and seals are cross-boundaries who freely move between water and land, and are symbolic existences for Kuribayashi. A permanent installation in the Towada Art Center opened in 2008 also takes the form of experiencing the upper and lower spaces, and the audience will be able to see a view which the ceil is seeing above the water.

An understanding of the rule of the maps leads to the development of thinking on a wider theme regarding the history of the land, boundaries indicated in maps and the history of human making the lines. Kuribayashi created a 4 meters high mountain for the work "Inseln (island)" in 2010 exhibited at the "Nature Sense" exhibition at the Mori Art Museum. Viewers were to see a pile of earth viewing from the floor level.  As we went up the stairs, we were to a see a transparent acrylic plate placed horizontally on top of the mountain with a tip of the mountain stretching on the acrylic in the shape of a map of the world. "Wolkenmeer (sea clouds) water >|<wasser", which was in a solo exhibition at the Towada Museum of Contemporary Art in 2012, was a work with the same concept, showing the map in the sea of ​​clouds.  In the work, the shape of the world, which we perceive as the definitive boundary line between land and sea, changed over time due to the amount of the fog.  It is easy to understand by taking the shape of Japan surrounded by the sea as an example, but recognition of the shape is often directly connected to national identity and ideology. While looking at Kuribayashi's works, we are reminded that land is merely a temporary shape, which is only a momentary phenomenon in the long history of the earth.

What is especially characteristic for Kuribayashi’s work is that they all encourage audience to move their body from their own interests and cross the actual boundaries, and the artist always prepares an unexpected perspective for cross-boundaries.  In other words, Kuribayashi's work is not just a work to see, but a device that guides the spectator's point of view making them experience the transboundary of boundaries.  In his "Principal Office", presented at "Ichihara ArtxMix" in 2014, was a frozen room in an ex-elementary school building.  The audience was able to enter minus 35 degrees frozen room by crossing the line from the daily life to an extraordinary situation captured inside the work.  In world of art today, the boundaries between audience and the work is normally strictly defined in a term “appreciation”. Kuribayashi's work breaks down the boundary to achieve a new relationship between art and the audience.

Kuribayashi's work draws boundaries.  Or make the audience aware of boundaries that people do not acknowledge on a daily basis and tell the spectators that the world across the boundary is different from where we know.  In our childhood, we might have an experience wondering what is there over that railroad or that forest.  We had a desire to go to a place where we don’t know, or a fear to the unknown. We have been forgetting gradually those of our instinctive interest to the world across the boundaries, living our lives settled safely in the same place. The Eurasian continent once had no boundaries, and people traveled from west to east. The spirit of Nomad, asleep in the history of human migration, still may occasionally lift its head in our mind. We may be able to say that by making “boundary” as a theme, Kuribayashi's work deals with realm outside the boundaries, or space which does not belong to any classification. More than anything, Kuribayashi's works give large impact to large number of audiences. It may take a long time to find a right setting to realize his large number of outstanding viewpoints and ideas. But talking with the audience who experienced Kuribayashi’s work, I am sure that there are always many people waiting to for projects which expand our perspective beyond the understanding of our world narrowly defined in our daily setting.