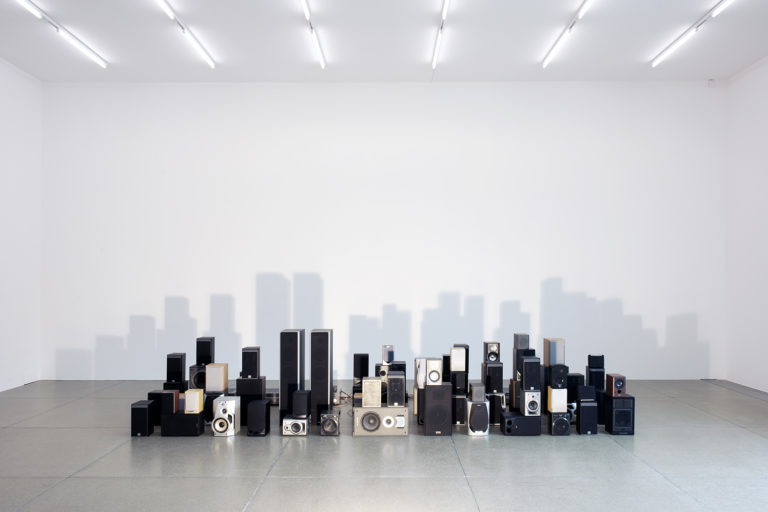 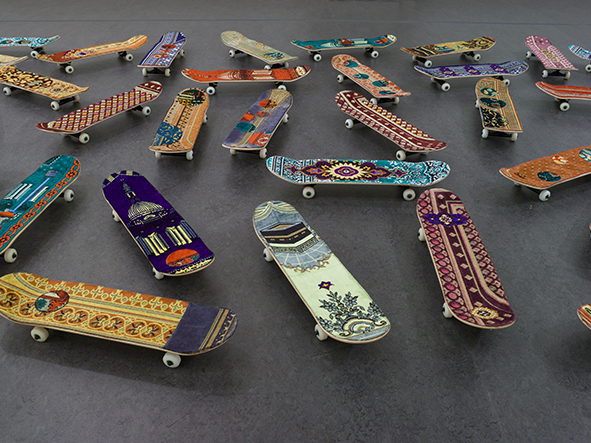 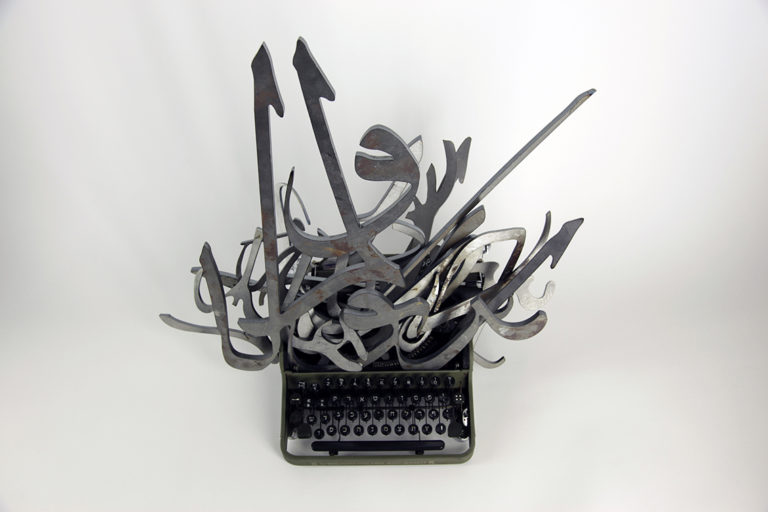 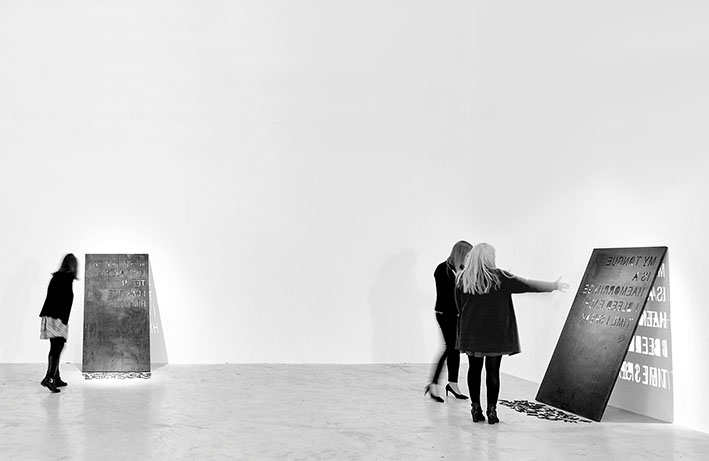 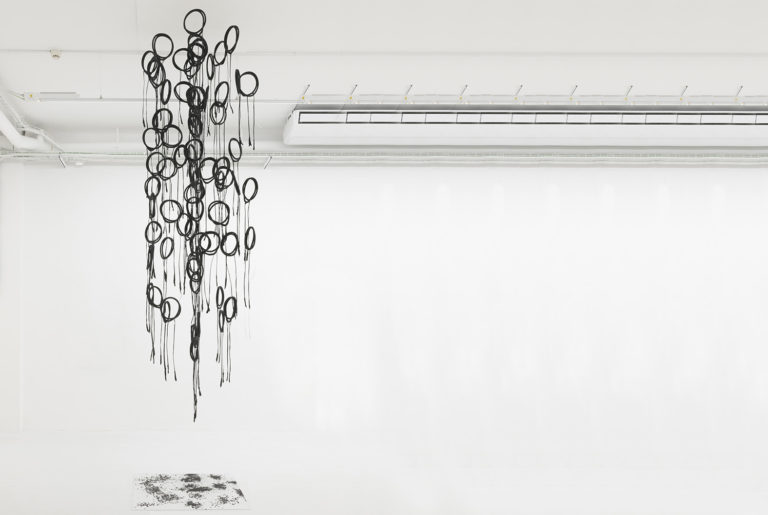 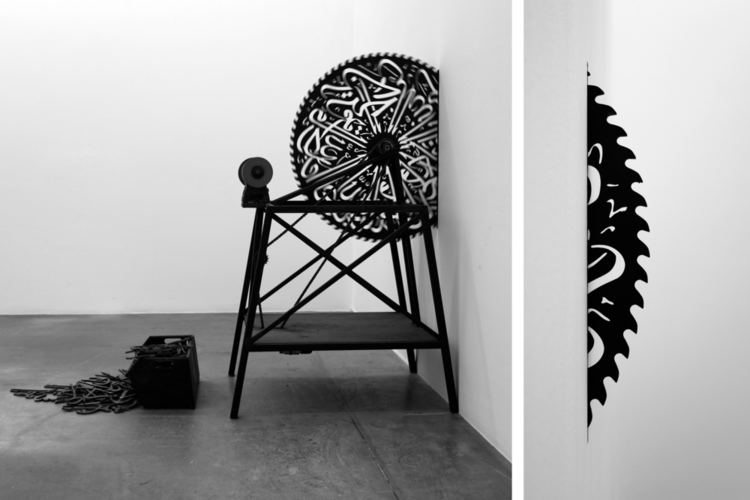 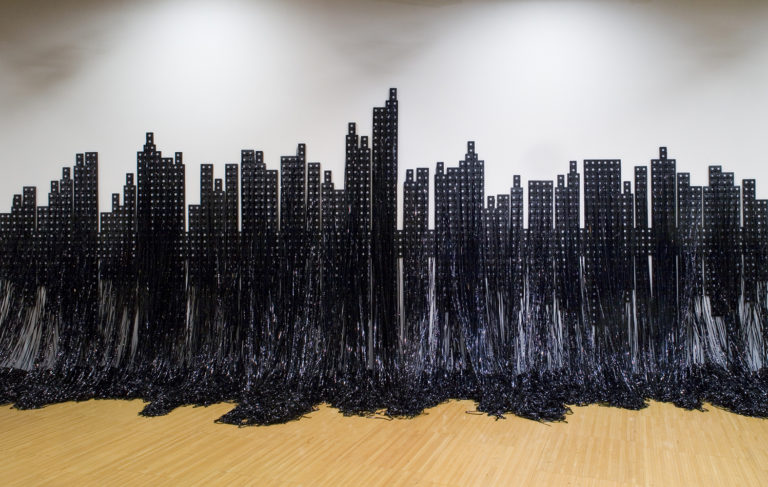 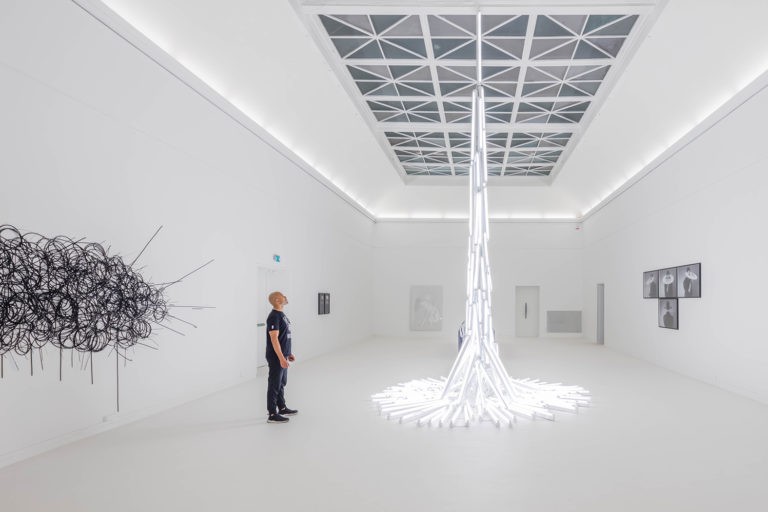 Moroccan artist, born in 1970, lives and works in Paris. His multimedia practice encompasses video, installation, drawing, painting and sculpture. He works on obsolete materials and their uncertain futures, he criticizes the illusory mechanisms that bind humanity to technology, ideologies and their influences in a society in crisis.

If art is a market,
let us try not to be
vegetables.

作品について Works by the Artist

Born in 1970 in Tangier, Morocco, Mounir Fatmi is working internationally based in Paris since the end of 1990s’.  As he explains about himself, “I consider myself an immigrant worker” when asked how he sees himself as an artist, one of his themes is about immigration, or encounter of different cultures. Bun not merely placing himself as a stranger in the West, his strategy is to twist the position deeper. His standpoint may be to find a position to be “the other” outside today to question what we consider as common understanding of the life, including beliefs, culture, or technology. Through his work, we are to explore how the world is being told, consumed, and transforming.

The first work I found on internet was Save Manhattan series. The works shows an outline of Manhattan as a shadow of scattered objects. It may talk about Manhattan and terrorism, but does not mention anything else. We find that the shape of the shadow of what we know is merely reflection of different objects. As many Japanese artists are based on craftsmanship to deal with objects, the impression of the work was very fresh thinking that there are interesting artists in the work who are able to deal with what does not actually exist. Though it was merely a shadow we were seeing, the impression of the work was strong enough to stay in the memory as a shadow for a long time.

Next impression I had about the artist was when I invited him to Japan and travelling together to see the site in the countryside. I remember that I felt little strange seeing him taking so much of video without seeing the actual beautiful landscape. He was interested taking video of the view and seeing the landscape through the small finder.

The artist refers to his experience in his childhood, playing in a flea market of Casabarata in Tangier, where his mother sold children’s clothes. The vast amounts of secondhand objects in the market is still a metaphor for him comparing the flea market to museums, since stepping to the artist’s career starting from Rome studying at the free school of nude drawing and engraving at the Academy of Arts at the age of 17.  Getting back to Morocco, before immigrating to Europe as an artist, he worked several years for a commercial agency where he experienced the commercial flow, how images and language works in communication and consumer society. This may have led artist to be interested, especially among common objects, to those related to mass communication technology or those to store information. For Example, VHS tapes, already a dead material popular from 1970s’ appears frequently as the chief material for the artist. In his work “Skyline”(2007), he uses number of VHS tapes to create a skyline of buildings. In the work, viewers can imagine voices and information building a city, tangled up together to be a city.  At the same time, we may also feel uneasy by also imagining that the technology we now depend or a city which is now build up with would soon be outdated without realizing when it was.

Obsession to develop technologies is not only for the city or the Western world. However, it is not one shared same belief but with vast range of difference among each region, followed by collision with ideology and society which has already been existing.  In “Modern Times. A History of the Machine” (2009 to 2010), the artist shows a video image with rotating circular gear shapes. The title of the work is taken from Charles Chaplin’s 1936 film which focused on human identity in the industrialization and mass production system. The impression of the video image which is like seeing a construction of a city from above or a large mechanical system moving, of the work looks so human-less even with Arabic text indicated. There also are number of cogs with Arabian texts cutting the floor. We are not able to read the Arabic texts whether it is taken from a phrase from Koran, but we still can start various of discussions after seeing the work. This strong impression opened to various meanings, poetic in a way, is also the characteristic to Fatmi’s work.

The artist has shown his works in many exhibitions, including Venice Biennale and Lyon Biennale. In Japan, the artist was initially introduced as a part of Africa Remix exhibition, held in Mori Art Museum 2006. His work was in Setouchi Art Triennale 2016, and it still will be open once in three years. Here, he has shown his ability to shift his unavoidable gravity of the West vs Arabia context to something other, but more about absence of people who used to be there in the island for generations. Then, I started to understand the reason he was taking a video rather than seeing the real view. It was his professionalism to stay something as “the other” without being carried too much with emotion.