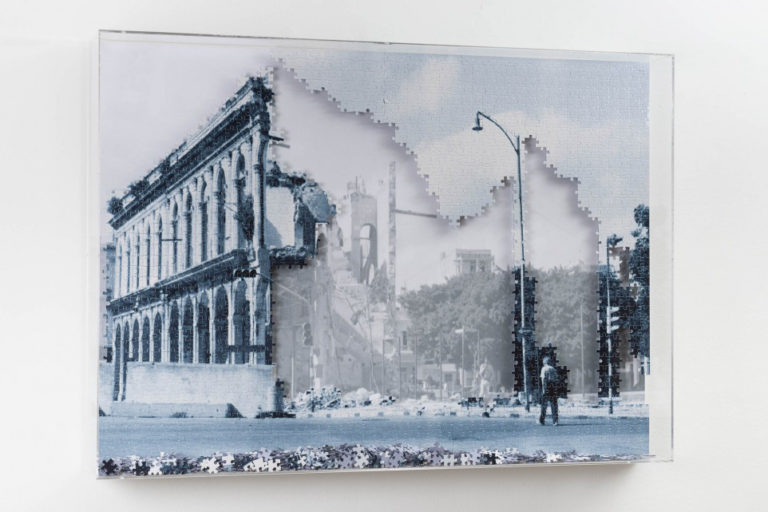 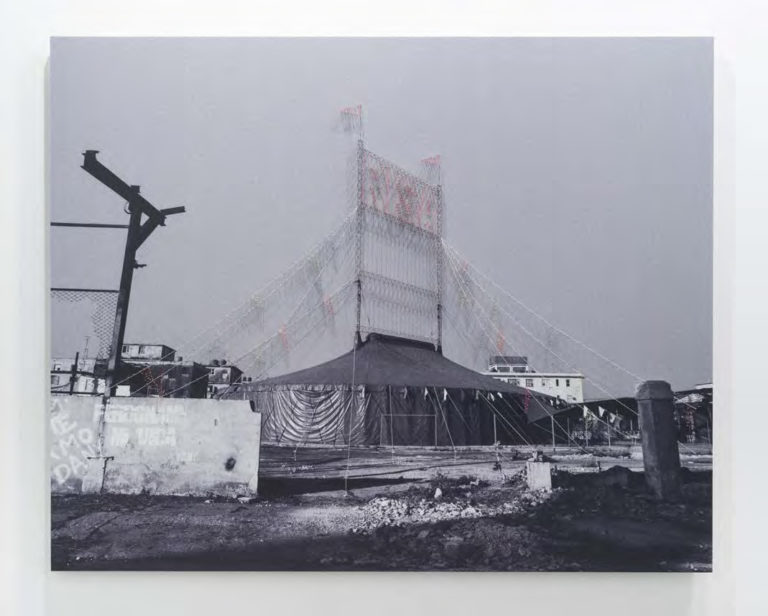 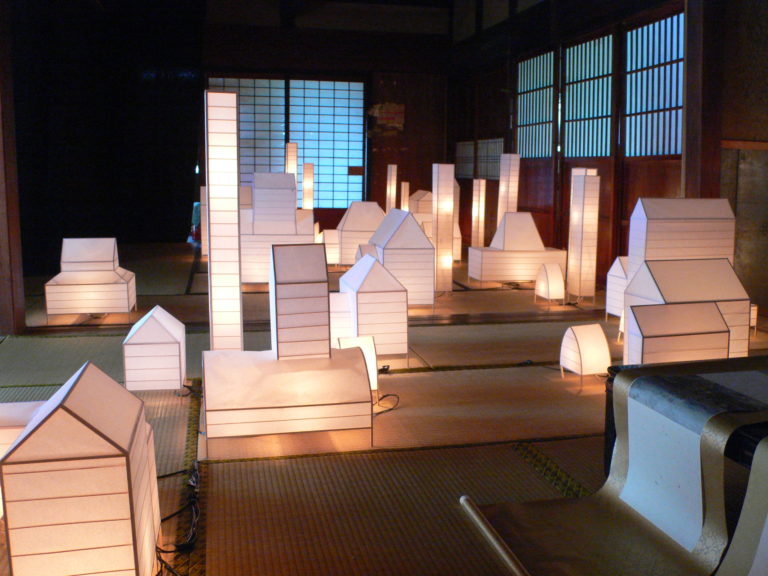 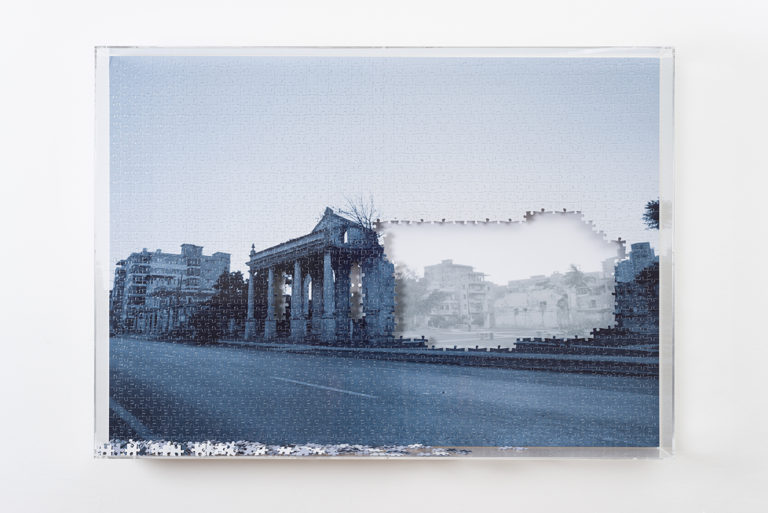 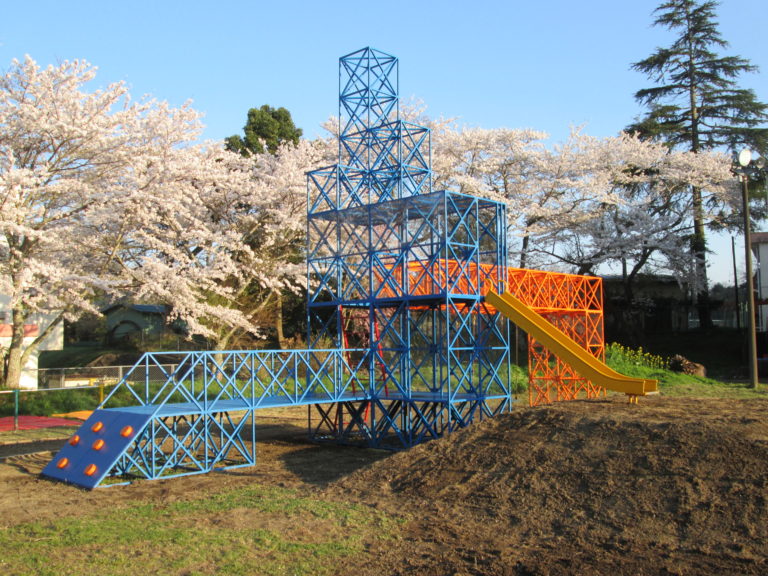 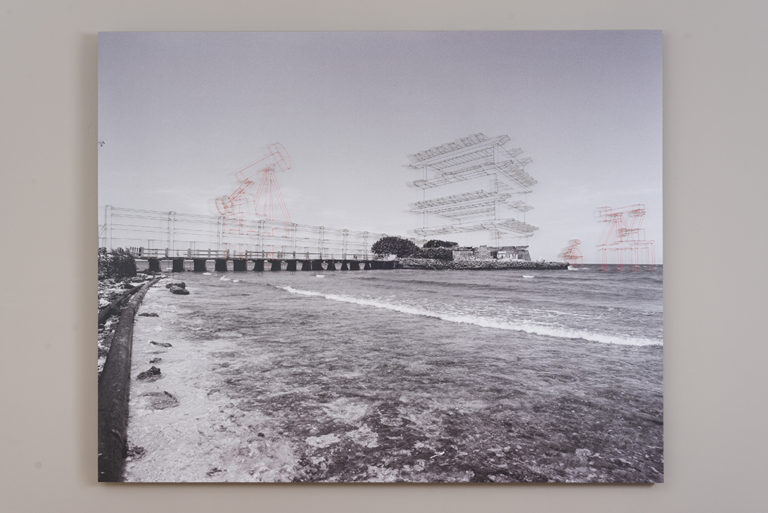 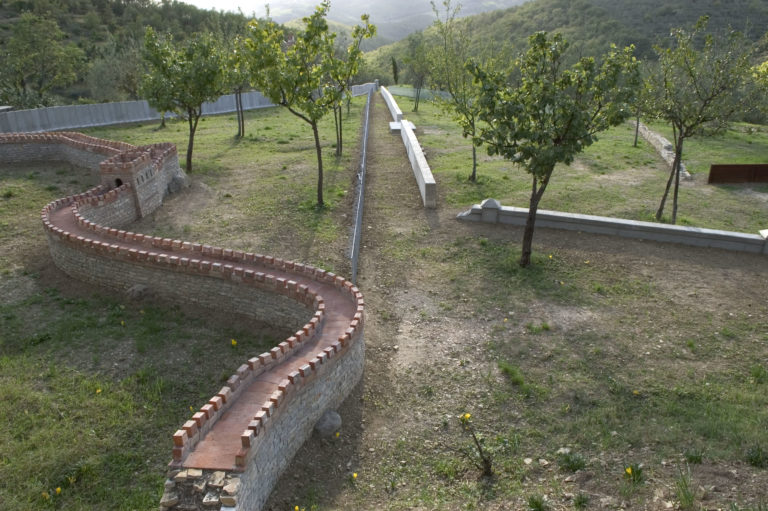 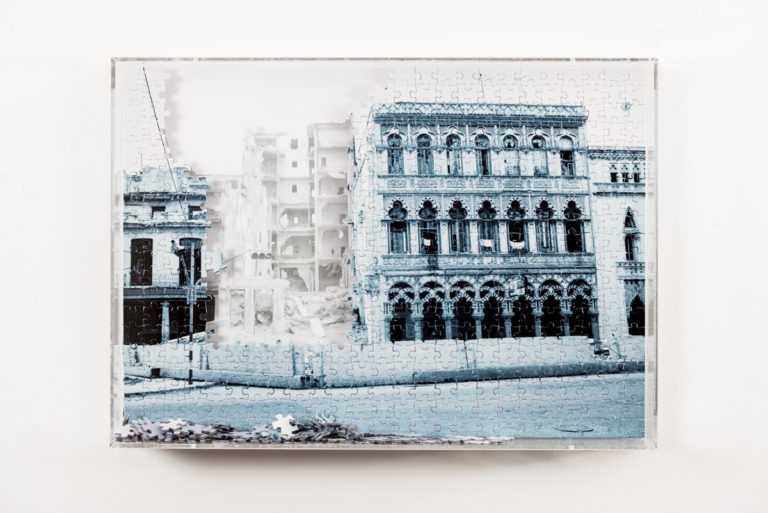 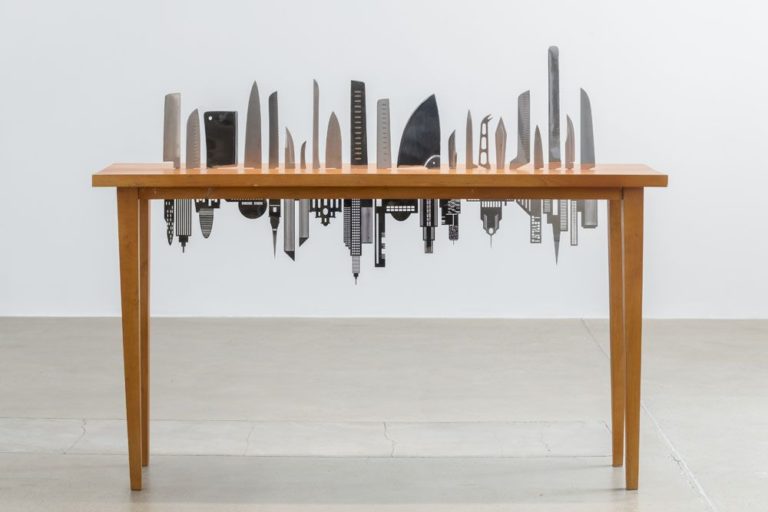 Born in Cuba in 1967, Garaicoa studied thermodynamic and later painting at the Instituto Superior de Arte in Havana (1989-1994). He employs a multidisciplinary approach to address issues of culture and politics, particularly Cuban, through the study of architecture, urbanism and history. His chief subject has been the city of Havana, and his media include installation, video, photography, sculpture, pop-up books, and drawing. Together with his wife, he founded the artists-in-residence project Artista X Artista in Havana.

“The streets have been the blood of my work; all the cities have a heart to discover. In this way, I try to see the city like a big text, where I’m a fragment, the way for the interpretation, and the deconstruction. From the beginning, my work shows sociological ideas, a symbolic archaeology, and a new architecture; all is a project for changing the spaces of the street into an utopical space; a new symbolic and political space.”
on Havana, Carlos Garaicoa

Carlos Garaicoa was born in Cuba in 1967 and is currently based in Cuba and Madrid.  Garaicoa's is using architecture and urban landscape as a method to see the world, and through his works we are able to reflect upon the system of the world, politics, and society around us, even they might not be obviously visible for us. Wide range of material including photographs and documents are being used in his work sometimes like a large three-dimensional collage.

After becoming independent from the colonial situation in 1902, social structure of Cuba subordinated the economic rule of the U.S. who has intervened the independence war from Spain until the Cuban revolution in 1956. Especially during the Prohibition Period in the U.S. in the 1920 to early 30's, Havana became an entertaining city for tourist from the U.S. with villas and resort facilities constructed for the wealthy class. The old town-scapes of those days still remain in Havana, from the colonial style of the Spanish era to the U.S., and the notion of the post-revolution city-scape of Havana may be said as the mixture of open ended Utopia under the communist ideals and the "reality" of the old days.

In the early 1990s, when Garaicoa started his career as an artist, Cuba was under the period of social change, experiencing serious economic recession losing support from the communist countries after the dissolution of the Soviet Communist Party in 1991, while the U.S.  continuing its embargo policy. Many construction works of new buildings stopped while old buildings being untouched without restorations. The first activity Garaicoa started as an artist was happenings, working on the actual buildings and plazas and observing the reaction of the public. We are able to understand Garaicoa’s interest in the reality from his first project in 1990 entitled Suceso en Aguiar 609 (Happening of Aguiar 609). The artist announced the residents in his apartment that the building and life will change on a certain day, and then stretched nylon tape filling the empty space of the building. He photographed reactions of people and collected the impressions of the work without telling them that it was art.

Working several times in the public situation, he began to notice the details of the city, such as the remaining traces of the past, numbers, and pillars of the buildings which has already disappeared. What was the ideal city in Cuba may had been the next question. The artist starts to assemble vast archive of photos and texts, noticing a possibility of the city that might have taken another result of the development based on different desire and idea. The unrealized different possibilities, reality versus fiction, or simulation emerge as new themes and methods for the artist to pursue.

At the Havana Biennale in 1994, was introduced as the upcoming generation in Cuban art. Around that time, in the international art scene, there was a trend of era when curators were starting to be interested in artists outside the West, focusing more on artist from Africa, South America, and Asia. Garaicoa quickly received international attention.  In 2002, he was invited to exhibited at Documenta 11 which he exhibited “Continuity of Somebody's Architecture”. The artist made a research of original plan of a ruined building which was left uncompleted in Havana, and along with the photo of the ruin, the artist exhibited a model of the completed building, but instead of merely making a model based on the original plan, while visualizing the ideals at the beginning of design, the artist worked with architects will a certain freedom to develop the original plan to combine fiction with the unrealized Utopia.

Texts including the title of the work are important integral part of his work, sometimes political and poetic, reflecting artist's thoughts on the social issues such as poverty, human condition in the city, mass consumption, and social disparity. The artist has been working with Phrase series in a period time, which fine pins are being applied on photographs of a signboard of buildings found on streets to add letters by connecting the pins with threads. For example, in La International (2009), on the building signboard "La International", texts were added by the artist saying "up, down, to the side. Without a place. The poor of the world."  The selection of existing buildings by the artist and its contrast with the added text is always interesting enough showing the artists creativity playing with the words and phrases as the essential part of the work.

Garaicoa has been taking photographs of buildings in Havana for many years, some other very recently, but each of them had collapsed or were throw down in the last years. In this particular case, Garaicoa photographed one of Havana Pediatric Hospitals, built in 1934 by the famous architect firm Govantes & Cabarrocas. According to the artist, after several attempts to repair it, it had to be demolished due to structural failures. Despite of being an art deco landmark of the city it was almost 30 years closed (1988-2017). All those years it was a standing monument to chaos and negligence in one of the busiest streets of the city.

Another example of this kind, is Circo , It is a circus tent left in an industrial area of ​​Havana. By facing the idea of ​​abandonment and nostalgia that the photographic image proposes, Garaicoa vindicates the happiness that these places bring to people. Hence the title Circus and the word Risa (Spanish for Laugh) displayed on the top of the tent, which creates an over dimension of the architectural space of the tent by means of the placement of the threads and pins composition.

Concept is an important element in contemporary art. But the impact the work itself is far more important to make the viewer stop by and start considering what the work is about.  Garaicoa's works are good examples showing the balance important for contemporary art. The puzzle series from 2019 are combination of photograph and jigsaw puzzles. The work is small and the idea is very simple. But the impact of this simple idea, an idea we cannot easily come up with, and its strong outcome is enough to give certain impact to the audience.

By expanding his activity internationally, the range of Garaicoa's works is also expanding. Not only in Cuba, he is able to find artificial landscapes anywhere around the world as everywhere is created based on each of their speculations and social backgrounds. "I don't Want to See My Neighbors Anymore", made in 2006, was the outdoor work, miniature of Berlin Wall, the wall between the U.S. and Mexico, or the Great Wall of China. If you are a Japanese audience, from an island country who always have natural borders and always high brick fences between your neighbors, you may initially think that this work is an excellent work with a humor.  People from Europe who always need to be concerned of boundaries from the neighbors, or people from countries under delicate situation between other countries might have completely receive different kind of strong impression from the work. Even the impression may be different, the concept of the work can be shared with various audience as the visual impression and the concept of the work is properly strong.

I had a chance to work with Carlos Garaicoa several times. One of the occasion was for a project for the rural area in Japan in 2006, where there were many unused old houses due to aging and depopulation. While looking around to see houses and empty field where houses were already demolished, I recall that the artist was specially interested in Japanese cemetery which is completely different from those of the Western world. Garaicoa said “It's already like walking between houses” while we were both talking a walk through the grave stones. Galaicoa finally came up with the idea to realize for the project making a stone graveyard for lost houses in the rural area, and actually build up grave stone with the shapes of the houses. In an empty house next to this graveyard, he installed many lanterns with shape of houses which brightly glows in the darkness of empty house. Excellent artists do not lose their themes no matter where they are, and able to realize new ideas reading the specificity of the place. Looking back on the activities with the artist, I think that Carlos Garaicoa is one of the most interesting and creative artists of this kind.