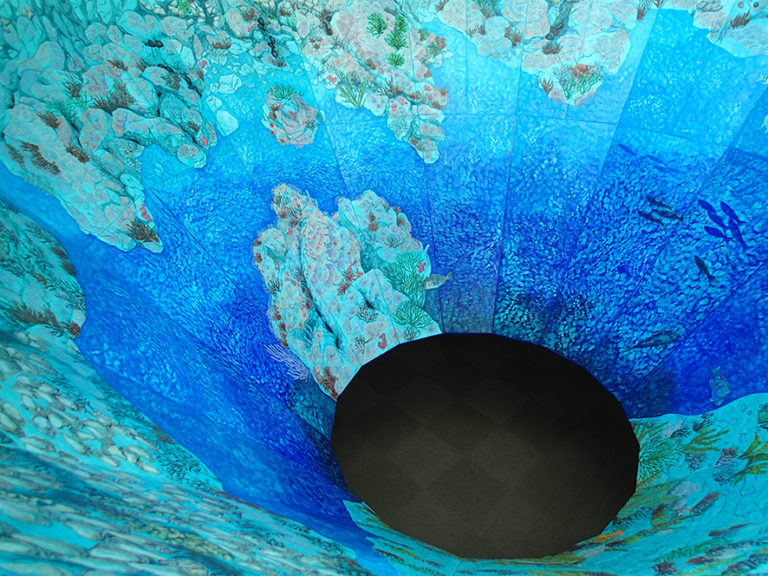 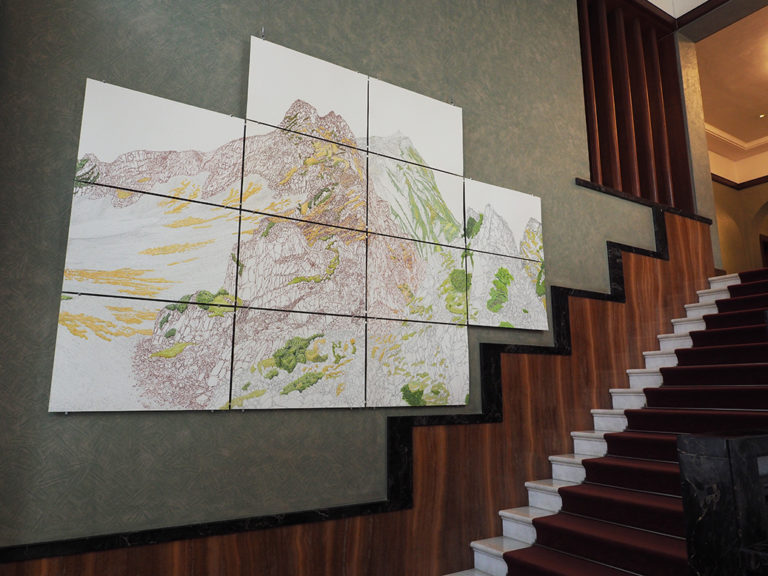 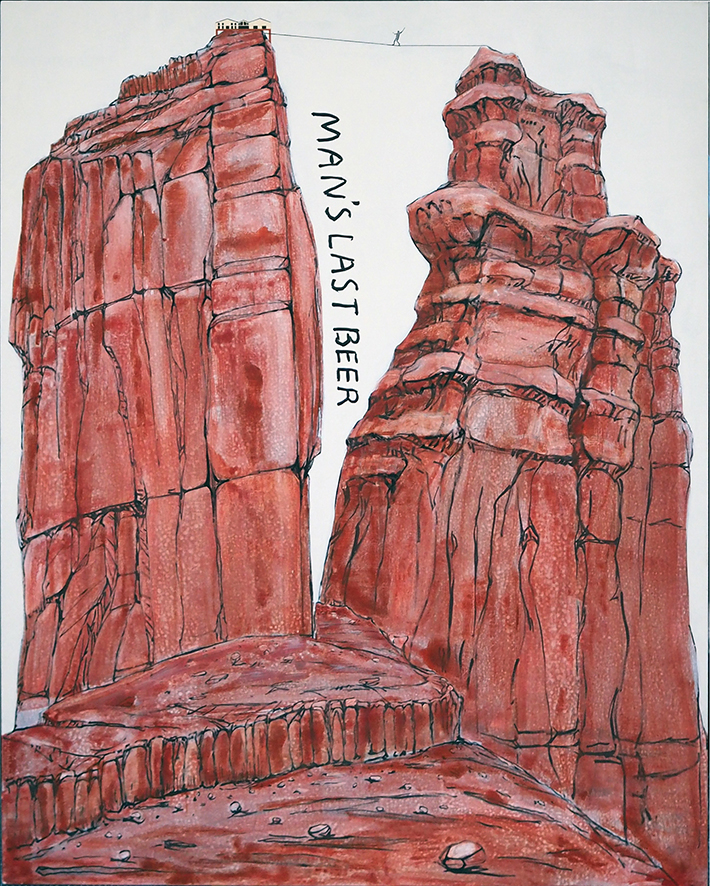 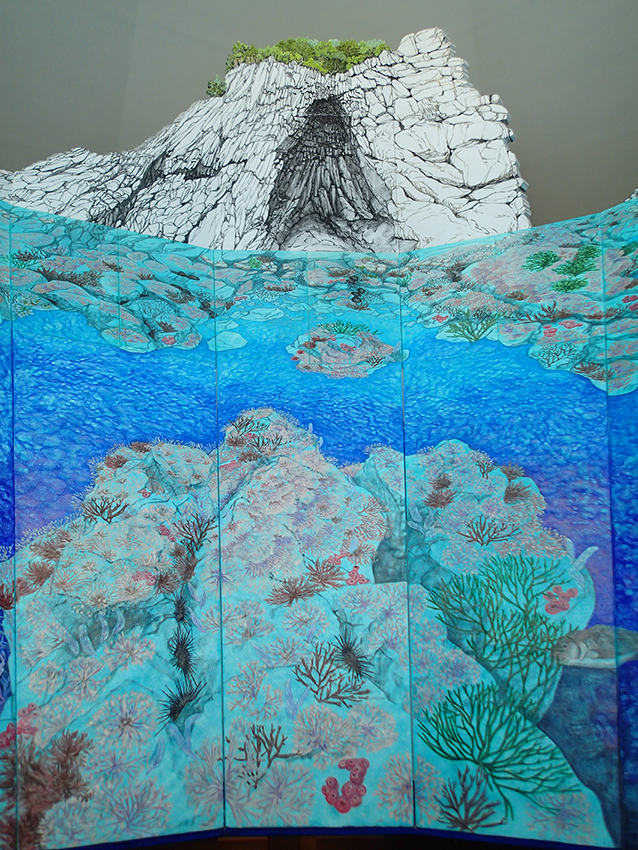 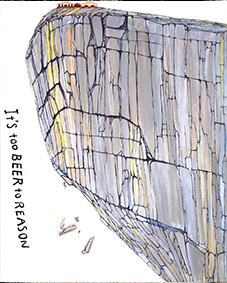 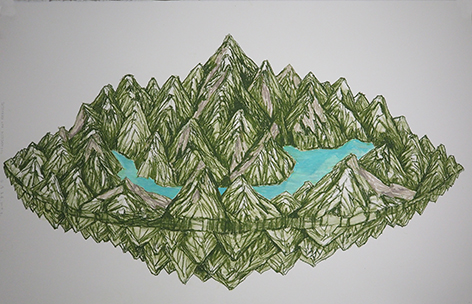 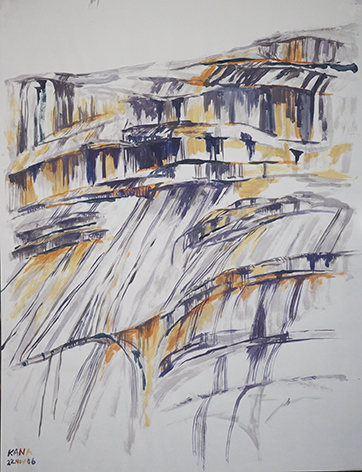 Born in 1975, Tokyo. Participating in number of residential programs internationally, and made a debut exhibition in 2010 at Tokyo Wonder Site (artist name, Kana Yoshida) . Participated in number of notable exhibitions since then. Changed the artist name to Kana Kou in 2015. Passed away in Feb. 2020 while preparing for a group exhibition at Teien Tokyo Metropolitan Museum.

Born in 1975 in Tokyo. Most of her works are landscapes reflecting her own experience climbing mountains and diving into ocean. It is not merely an experience like as a tourist, but in order to draw a cliff, she had to climb a cliff. Her landscape paintings are combined result of her multi layered experience of what she saw, or impression or even a fear while encountered at the real site. Her works thus frequently ends up to different from real scenery, sometimes a panorama view, or sometimes a condensed object taken from nature.

In 2006, the artist participated artist in residency program in Los Angeles and worked together with Yutaka Sone. During the residency, the artists saw vast wild nature for the first time, and received a great impact of the earth itself. There are many drawings from this period and we are able to feel the artist's energy through the works from this period.

In these years, the artist hasn't find the best solution to find a way to make the final work which was still a part of her experience, to cut the work from herself to be exhibited to the audience. In other words, works from this period is still are part of her body experience. We are able to find number of traces of her activity through video, but still many of them are not edited to the final work for exhibitions. One of few outstanding exceptional works is a performance she did in Finland in 2009. The video work was shown also in Teien Metropolitan Museum in Tokyo in 2020. This video shows the best consistency of of her performance and the outcome, a product to be shown to the audience. Another extraordinary example is series of of works entitled "Man's Last Beer" from 2009. The artists made number of drawings and final works under the theme, as a result of her experience climbing the mountains dreaming to reach the safe camp.

By summarizing her actions and experiences, and the relationship between the work and the audience, in 2010, "Beautiful Limit" was presented as a "work" in front of the audience as an object that was separated from one's body for the first time. The work exhibited in Wonder Site in Tokyo and Opera City Art Gallery. It was a set of about 130 drawings (each papers are 60 x 90 cm) together creating a mountain landscape with a width of about 37 m.

The work is a combination of various landscapes that the artist has experienced. It was assembled and exhibited in a form that surrounds the audience. It was also the first attempt to compose one's own experience in three dimensions. Currently, part of the work is on display at the Tokyo Metropolitan Teien Art Museum Kou left many interesting sketches while climbing the actual mountain.

Around this year, the artist also made her major works such as "Sky Walk" and "Face to the Green". Along with "Beautiful Limit", these works shows that the artist is trying to depict wide nature, what she has experienced and saw. The work naturally tended to spread horizontally in a wide angle. In one of the interview around this time, she mentions that she was somehow at a loss of next step understanding that the works tended to always stretch endlessly. In order to find a scenery which has an end, the artist decided to move to an island.

In 2012, the artist produced "Panoramic Forest - Panoramic Lake" for LIXIL Gallery in Tokyo and "Vertigo at Seongsan Ilchulbong" for VOCA exhibition held at Ueno Royal Museum in Tokyo. Unlike her previous works which was always spreading widely around the audience, she was now trying to condense the panoramic scenery into an object in front of the audience as an object. The artist also started to create three dimensional objects around this year.

The artist was very busy period from 2012 and 2013, participating in different group exhibitions one after another, while postponing a solo exhibition scheduled in a gallery which I was curating. The artist was also working on a plan toward Setouchi International Triennale with several completely different ideas. All of them were very interesting; one of them "picture-story show", a performance which we decided not to realize in the end, was also an outstanding plan. The artist chose to work on to develop a plan with Hanasuwa Island which became her iconic work in 2013.

"The Secret of Hanasuwa Island" was featured in many magazines and became a popular icon. Another notable work from this period can be found at Momojima Island, Hiroshima Prefecture as a part of art site where Yukinori Yanagi is working as a artistic director. In parallel with the Setouchi Arts Festival, a solo exhibition was held in Daikanyama, Tokyo, leaving a series of works with an island motif.

In 2014, the artist worked for Ichihara Art Mix 2014 and MOT Annual at the Museum of Contemporary Art Tokyo. For MOT, the artist decided to work on the theme of underground and outer-space that she was most attracted to at that time, based on her experience making a research of the geologic research of the island. Around this time, the artist was seeing the landscape as a part of the earth, and was stunned by understanding that the large landscape she has been working with was only a very thin layer of surface the large planet. At MOT Annual, the artist exhibit drawings depicting rocks and the inside of the earth. For Ichihara, she installed a work called "Mole". The work will be developed on the stairs going up from the 1st floor to the 2nd floor. The visual impression of the piece totally changes when audience reaches the second floor like a mole coming up to the ground. It was a wonderful composition with dark ground underground and bright over ground.

During the years between 2012 to 2014, working for exhibitions one after another, her physical condition was getting gradually worse due to cancer. In 2015, she concentrated only on her solo exhibition in Sapporo, and in 2016 on Art front Gallery exhibition. For Art Front, the artist made a series called "Cosmic Cactus" by pealing off the drawings from the works which she prepared for MOT and applying on to the surface of cactuses. For the artist, cactuses were strange beings living in dry deserts containing water inside. The work was combined objects of her final theme, the earth and outer-space.

We did not had an opportunity to announce the health problem of the artist, and the artist had to give up to attend the exhibition. We all feel very sorry for the museums and organizers who kindly invited the artist to attend the exhibition. During 2016 to 2018, the artist had to come up with a solution rearranging what she already had, rather than creating new works. In 2019, the artist was able to attend a group exhibition for Toyama prefecture Art Museum. And in the end of 2019, there was an offer from Tokyo Metropolitan Teien Art Museum for an exhibition entitled "Garden of Life". The artist was happy to hear that she can work within this theme, and decided to work on a new drawing depicting a tree in the garden of the museum. The artist passed away in February without seeing the opening of the exhibition in October.